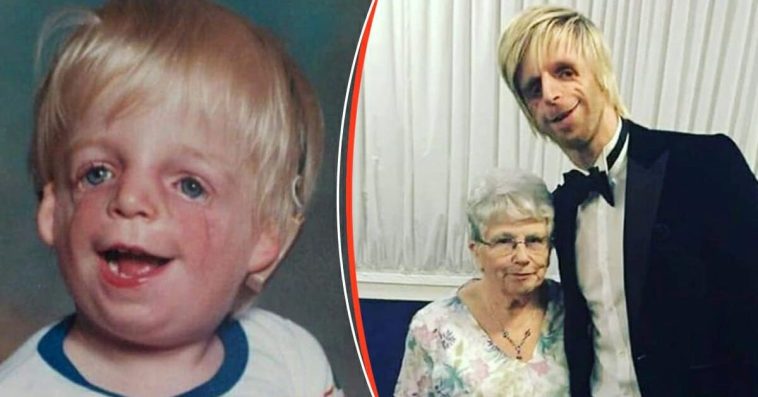 Success in the world we live in entails moving up while attempting to blend in. We label someone as “strange” or “abnormal” if they don’t fit in or are slightly different from the norm.

It’s a depressing way to look at life, and it places an excessive amount of value on how we appear to other people.

Just ask Jono Lancaster, a real-life person like the rest of us who, regrettably, has frequently been forcibly reminded of how cruel the world can be.

In October 1985, Jono Lancaster was born in England, but the hospital staff noticed something unusual about him almost away.

The sweet little kid had Treacher Collins syndrome. This rare congenital condition caused the asymmetry in the development of his facial bones.

The physicians informed Jono’s parents of his condition and added that it was likely he would never walk or talk. Jono’s parents, who were startled, gave up on him since it was too much for them.

“My parents were taken aback when I was born. 36 hours after my birth, I was discharged from the hospital. Social services identified a person to take care of me. At the 2015 Nord Conference, Jono recalled the foster carer, a woman by the name of Jean.

Jono’s parents abandoned him fewer than two days after his birth, giving him up for adoption. After the hospital notified Social Service, Jono was adopted and reared by a nice woman named Jean Lancaster.

When she first saw the young boy, Jean wasn’t alarmed or shocked. She only had to pick him up to feel a connection. When is it okay for me to take him home, Jean asked the nurse.

Jono couldn’t have asked for a better or more loving foster mother who gave him the love and attention he needed from the beginning.

Even Nevertheless, despite his mother’s strong support, Jono’s early years were characterized by a lack of sympathy from the outside world.

When Jono started attending school, he became more self-aware. He realized right away that he didn’t look like his classmates.

“I kind of felt like I was alone myself, that I was the only person in the entire world who was like me. I wondered, “Why did I have to look like this? People get lucky and win the jackpot or go on to become professional footballers, doctors, or lawyers.” In an interview with Adelaide Now, Jono commented.

It’s crucial to understand that Treacher-Collins syndrome has no impact whatsoever on a child’s IQ. The only thing that interested Jono’s classmates was how he appeared. They used to pull faces and flee from him, claiming they didn’t want to catch his “sickness.”

“I used to keep my mom informed about my discontentment. He stated in an interview with the BBC that “she had already done so much for me.

However, Jono refused to give up and let the haters win, and he had a wonderful woman by his side.

Jean, Jono’s foster mother, wanted to get him back with his real parents. On May 18, 1990, she went the next step and adopted Jono after waiting five years for them to respond to her letters.

“I have two birthdays, then! “I used to tell other kids that their parents were trapped with them while my mom went to the hospital and looked at all the infants and picked me,” Jono said at the 2015 Nord Conference.

Jono made it abundantly apparent in an emotional Facebook post from 2015 that he would never forget his foster mother.

“Despite being a little short in height, this woman has the largest heart of anyone I’ve ever encountered. This woman has spent 30 years caring for foster children; she loves them and has given so much of herself. This woman wept each time a child was transferred to a new foster home because she thought she had let them down somehow. This woman accepted me even though she was a single mother in her 40s and didn’t know the future. Together with Claire and Stephen, this woman adopted me, giving me an incredible family. This woman was sent to me at a time when I most needed one; she is an angel.

Jean, my mother, is the name of this angel.

Jono developed a strong rebellious nature as a teen. He would occasionally act in ways just to grab attention. It was a strategy he used to divert attention away from the underlying issue—his physical characteristics. He was a heavy drinker who also sought to win people over by offering them candy.

“I was feeling really isolated.

Jono soon resolved to be a force for good and utilize his experience to help others, though, thanks to Jean’s love and care as well as his own strong spirit.

At the age of 36, Jono dedicates his life to helping individuals with Treacher Collins syndrome all over the world. As a team leader for adults with autism, he has been employed.

He interacts with them, offers them encouragement and support, and speaks with their parents about the problem. At the moment, Jono works as an inspirational teacher and frequently discusses Treacher Collins disease.

He claims, “My parents are still not interested in me.” My attitude has changed, and that’s what’s so strong. […] Nothing about it would change. More than anything, my attitude was a hindrance. Anything is possible if you have the correct attitude.

Australian toddler Zackary Walton, age 2, is one of Jono’s mentees.

Zackary has already experienced bullying despite his age. He has a lifelong friend in Jono, though.

The boy’s mother, Sarah Walton, told Adelaide Now, “We knew we had to meet him when he mentioned he was coming to Australia, and it’s made us so pleased to see Zack meet someone like him.

This photo was shared on Facebook in November 2014, shortly after Jono and Zackary first met. It’s just so sweet to see.

When Jono was a fitness instructor in 2015, he ran into Laura Richardson.

As their relationship developed, Laura accepted Jono’s illness. She accepted him as he was, and the two joined forces to make the world a happier place.

Jono always believed that if he wanted to have kids and build a family, he would resort to adoption.

“Being a father has always been my desire. My adoptive mother was absolutely wonderful, but I never had a father role in my life, and that’s something I truly, really want. I yearn for father and son moments. The school run, taking my kid to dance, gymnastics, or football – whatever they choose – are all things I want to do, Jono told BBC in 2011.

Any child Jono fathers have a 50% risk of having Treacher Collins, according to Jono. So even the mere concept of having a child of his own set off a cascade of feelings, morals, and self-questioning. Jono was generally healthy at birth, but many children with Treacher Collins experience serious medical issues, and some are born unable to breathe.

Therefore, Jono reasoned that adoption might be the best choice.

Giving a child a second opportunity, in my opinion, is fantastic since it worked incredibly well for me. Although Laura worries that she won’t be able to care for someone else’s child or that the child will simply want to find its biological parents, Jono said: “Laura feels she will have those instincts of truly wanting to bear a child. She also worries that she might find it difficult to care for someone else’s child.

In addition, she passionately desires for our child to be ‘our’ child. And I truly want to take care of her when she is expecting. I want her to relax on the couch or call me at two in the morning when she wants a pickle.

Jono and Laura sadly never had children. They made the decision to part ways and moved on after ten years of dating. Jono provided an Instagram explanation of choice and said:

“Laura and I had 10 wonderful years together before deciding to part ways since we were not developing as a pair. There was Nothing but respect for one another, and it had Nothing to do with appearance.

Some of his supporters sympathized with Jono and made an effort to see the bright side, reassuring him that something beneficial may emerge from a failed relationship.

“I don’t believe that breakups can ever be made to seem positive. It was tragic,” said Jono in response.

Watch the video below to hear Jono share his story. I promise it won’t leave you untouched.

Even though Jono’s story is tragic, it’s inspiring to witness his courage and strength in action as he uses them to aid other kids in similar circumstances.

I sincerely hope we can aid in bringing more notice to Jono’s story. Not just to serve as an example to others but also to inspire courage and hope in those who lack it. Since we could all use a little motivation now and then.

Nobody should ever be discriminated against, bullied, or judged based only on their appearance! Share this article if you agree!