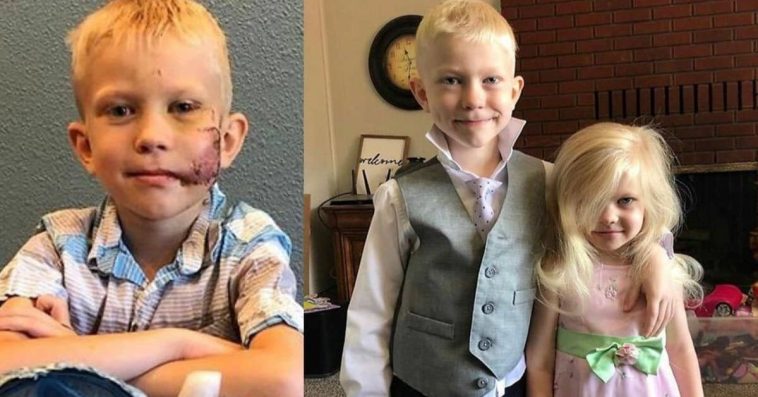 The world praised Bridger Walker as a hero after he ran in front of a German Shepard to save his younger sister from an attack.

Bridger, who was 6 at the time and had to have 90 stitches in his face to repair the damage, appropriately justified his behavior by saying, “If someone had to die, I thought it should be me.”

After a year has passed, Robert Walker, Bridger’s father, says that his son still stands by those words.

“Do you want it to disappear, my wife and I asked him. And he said, “I don’t want it to completely disappear.” “the father says. “Although Bridger thinks his scar is something to be proud of, he does not consider it to be a symbol of his heroic act. He simply takes that as “I was a brother, and that’s what brothers do.” It serves as a reminder that his sister is safe and unharmed.”

When he gets praised as a hero, “it almost worries him sometimes because he [thinks], ‘Maybe I should have done more to shield her,'” dad tenderly explains of his now 7-year-old son.

When Bridger of Cheyenne, Wyoming, intervened to save his sister, it was that selfless attitude that won the hearts of millions around the globe.

When his aunt Nikki Walker wrote about the incident on Instagram, the amazing story went viral. Celebrities from all over Hollywood took the time to praise the young child, including the Avengers cast members Chris Evans (Captain America), Mark Ruffalo (The Hulk), and Brie Larson (Captain Marvel).

Not just celebs were involved. After hearing Bridger’s story, strangers all across the world began giving the young boy supportive messages and nice presents as well.

Everything going viral was undoubtedly unexpected, adds Robert. It’s not something we’d ever want to go back to, but the light was exponentially brighter than the darkness.

“Chris Evans made a fantastic video and sent the shield. Bridger was thrilled beyond words, “He continues. “The moment he spoke with Tom Holland, he was probably the most stunned; it was a live call, so it left an impression for sure. We were very touched by the fact that his emotional recovery was truly a global effort.”

Dermatologist Dr. Dhaval Bhanusali of New York City, who offered to fly Bridger to his office and give him free treatment, contributed to the attention Bridger received.

Robert says, “He gave us so much hope. We had just had a really disappointing appointment with another specialist who stated Bridger’s scars couldn’t be addressed for at least two years. After everything, that was sort of our first rainbow.

The Walkers accepted Bhanusali’s invitation and flew to New York to have Bridger undergo two laser treatments. In the midst of the pandemic, Bridger began attending Utah-based dermatologist Dr. Cory B. Maughan, who conducted two further surgeries on him.

Since then, every single one of them has worked to reduce Bridger’s scars and restore his smile and confidence.

According to Robert, “after a year, Drs. Bhanusali and Maughan have been able to take care of the scarring almost totally.” “Is he ever going to smile again, or will it always seem injured? It was our main worry when we got home from the hospital. That was more than we could have asked for, especially after seeing his smile brighten once more.”

Bridger “handled it like a champ,” according to Bhanusali, even if the treatments aren’t “the easiest for a tiny man to go through.”

The dermatologist makes a joke, saying, “I probably displayed more facial discomfort while doing it than he did.” “The bravest little person I’ve ever met is that kid, in my opinion. People may not have fully appreciated the extent of the damage.”

You want him to smile naturally, like himself, Bhanusali explains, “not like a muted imitation of himself.” “When we first saw that, I suppose after the first treatment or shortly after, that was our win… that was the best thing ever,”

According to his father, Bridger is currently delaying further treatments while he waits to see how the bottom half of his scar responds to the most recent procedure.

Even though the subdermal scarring has thickened and shown some redness, Robert and Bhanusali think things are looking up.

The surface, a reddish portion of it, still needs some work, but structurally, everything is much better looking, according to Bhanusali. “I used to say to Robert, “When Bridger is in junior high or high school, I want this to be a story he tells, not a memory he has to go through every day. And I believe that circumstance will arise.”

Robert claims that as Bridger recovers, he is enjoying seeing his “bright young child” get back to being “fun, gregarious, and full of life.”

Bhanusali saw it as well: “His personality and his happiness and delight are evident. There is a different human being there when you can see his eyes “he says.

He is a different person when you can see his eyes, “He claims.

Robert adds that he will always be appreciative of everyone who gave his family such strong support over the past year.

He claims that “it was truly miraculous.” There must be something wonderful about the world when thousands, if not millions, of strangers, reach out to a 6-year-old boy in the middle of Wyoming.

I couldn’t be more appreciative, he says. “If there’s a lesson in all of this, it’s that decent people are out there who are willing to do tremendous things for a little guy,” he said.

What a hero Bridger is; his act of selflessness is amazing, and I’m happy he’s healing well and receiving all the love and care he deserves.

What do you think about this brave boy’s story? Do you know any kid who is brave like this one? Please let us know in the comments, and don’t forget to spread the news so that we can hear from more people.