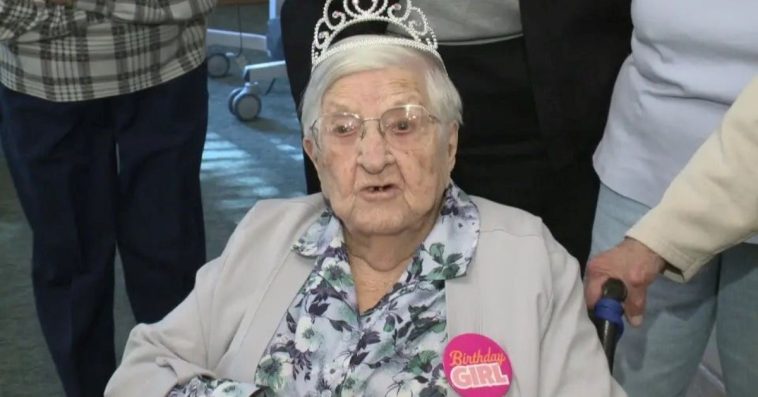 Bessie Hendricks, from Iowa, experienced the Roaring Twenties, the Great Depression, two Wars, the rise of the internet, and a worldwide pandemic.

She was 115 years old when she passed away on Tuesday at the Shady Oaks Care Center in Lake City and was thought to be the oldest person in the country.

Hendricks, born on November 7, 1907, was a teacher at her home in Calhoun County, a one-room schoolhouse. She had five kids, two of whom she outlived.

Hendricks revealed her longevity formula to the Fort Dodge Messenger when she became 112 years old. She advised readers to work hard, avoid doctors, and indulge in sweets like birthday cake or pie.

On January 7, at 2:30 pm, Hendricks’ funeral ceremony will take place at the Lampe and Powers Funeral Home in Lake City. Dana Morris, the funeral home’s director, said a live stream would be accessible at powersfh.net.

Morris stated that the funeral would feature a tribute to Hendricks’ remarkable life, including readings of her late daughter’s memoirs.

According to a running list kept by the Gerontology Research Group in Los Angeles, Edie Ceccarelli of California has passed Hendricks as the oldest living American. On February 5, she will turn 115.

There Are Several Centenarians In Iowa

Hendricks wasn’t the first Iowan to claim the honor of being a senior citizen of the United States. Dina Manfredini of Johnston, who is 115 years old, attained the title of the oldest person in the world and the United States in 2012.

She was an Italian native who brought up her family in Des Moines. She also worked as a munitions factory assembly line worker during World War II and cracked eggs in a food processing plant for additional cash. Her husband had previously worked as a miner there.

Researchers’ curiosity was piqued by a large number of centenarians in Iowa, which included both she and Hendricks.

According to Iowa State University’s Exceptional Longevity Laboratory, centenarians live past the age of 100.

There were 53,364 centenarians in the United States as of the 2010 census, or about 0.017% of the total population. In Iowa, 846 centenarians were reported in that year, accounting for a significant, if still insignificant, portion of the state’s population (about 0.028%).

According to Peter Martin, a professor at Iowa State whose research focuses on lifespan development and longevity, there are numerous elements that may explain why Iowa is a fantastic area for centenarians to reside.

He laughed and explained, “It’s because we’re cold half the year.

Martin claimed that jokes aside, Iowa winters do make individuals resilient, a trait that helps in surviving past the age of 100.

“According to our research, being 100 means having a strong mentality that can handle stress. The cold weather plays a role in this. We are capable of enduring a storm both literally and metaphorically, “Martin stated.

Genetics, environmental support (such as family support and health care), a lower-stress way of life, and the capacity to spend time outside and in nature are additional factors that affect longevity. According to Martin, Iowans are particularly fortunate to possess the last two of these factors.

Manfredini and Hendricks were supercentenarians—individuals who live past the age of 110. A mere 0.6% of the nation’s centenarian population, or 330 people, existed as of the 2010 Census.

Though Martin acknowledged that living past 110 is rare, she argued that it is a true testimonial to one’s fortitude and way of thinking.

“After 115, it gets really tough,” he said. Every year, you really receive a gift that you could never have imagined.

Do you wish to live past 100 years? Please let us know in the comments, and don’t forget to spread the news so that we can hear from more people.