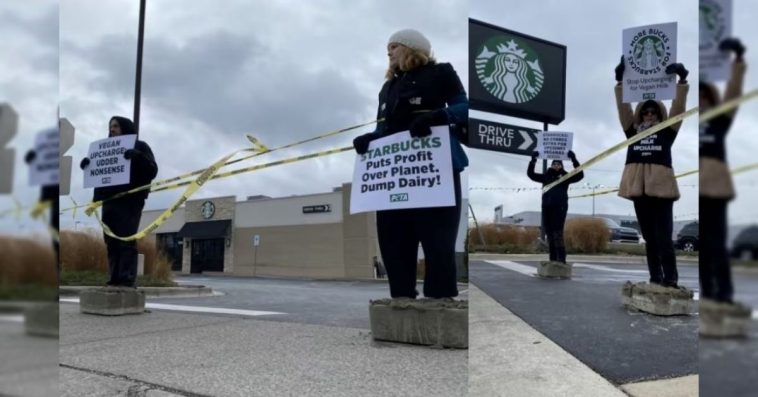 Four PETA supporters encased themselves in concrete and blocked the entry and exit of the Starbucks location at 18051 Mack Avenue for four hours today to draw attention to the need for the corporation to stop adding fee for vegan milk, which spare cows great suffering and reduces carbon emissions.

The Starbucks location was eventually forced to close. An ambulance was used to transport two demonstrators. You can find images of the “cement in” here as well as video footage here.

Supporters of PETA have blocked access to the Starbucks location at 18051 Mack Avenue by encasing their feet in concrete while wearing shirts with the slogans “Not Your Mom, Not Your Milk” and “End the Vegan Upcharge.”

The protest, which comes on the final day of the United Nations Climate Change Conference in 2022, demands that Starbucks stop penalizing people who care about cows, the climate, and their health by adding extra fees to the plant-based milk that the company already acknowledges are healthier for the environment (COP27).

Nearly a quarter of the greenhouse gas emissions caused by humans come from animal agriculture. Despite its claims to care about sustainability, Starbucks continues to charge more for non-dairy milk.

Customers who are lactose intolerant, many of whom are people of color, are harmed by Starbucks’ punitive pricing increase on vegan milk, according to PETA Executive Vice President Tracy Reiman.

“PETA has urged Starbucks to stop making money off the plant-based milk charge, but the company’s attitude has remained driven by greed so far,” said PETA.

Four PETA supporters were detained after their feet had been covered in concrete for more than four hours at the group’s earlier “cement-in” outside a Starbucks in Nashville, Tennessee.

Other PETA supporters, such as James Cromwell of Succession, have glued themselves to counters at Starbucks stores in Chicago, New York’s Times Square, and Seattle to protest the increase in price.

Former and present Starbucks CEOs have received a letter from Sir Paul McCartney pleading with them to discontinue the charge.

Workers forcibly inseminate (ra*pe) dairy cows by inserting an arm into the rectum and a metal rod to inject semen into the vagina, ripping the cows’ cherished calves away from them so that humans can consume the milk that was intended to sustain their offspring. They are killed after their bodies are worn out from carrying children repeatedly.

PETA opposes speciesism, a human-supremacist worldview, and is known for its tagline, “Animals are not ours to consume or abuse in any other way.” Visit PETA.org or follow the organization on Facebook, Twitter, or Instagram for additional details.

What do you think about animal abuse? How do you think we can stop it from happening? Please let us know in the comments, and don’t forget to spread the news so that we can hear from more people.