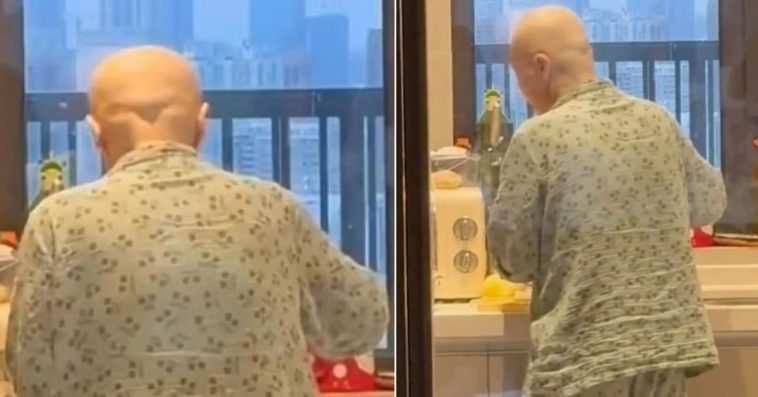 A Chinese man’s video of his terminally ill mother preparing their final meal has gone viral on mainland social media and is among the weekend’s most-searched news stories.

A man with the last name Deng from Dalian in northeast China posted the video on Douyin last week. His mother was seen in the video working in the kitchen bareheaded and in pajamas.

“Mum, rest in peace,” Deng captioned the video, which is set to the well-known Chinese folk ballad Farewell. Nothing is going to defeat me anymore.

The video was recorded by Deng, who is in his 20s, just before his mother passed away earlier this month, according to the Xiaoxiang Morning Herald.

He claimed that although his mother, a strong and independent woman, had received a cancer diagnosis in February, she had kept it a secret from her family out of concern for their comfort. She only permitted Deng to go with her when she needed medical attention for unspecified cancer, according to the news story.

Deng claimed that despite going through three cycles of chemotherapy, his mother never complained about the pain.

Days after his mother’s third chemotherapy treatment, he claimed, she abruptly asked him what he would like to eat.

She requested my company when we visit the market. We purchased kelp, meat, and potatoes. She entered the kitchen after getting home to start cooking,” said Deng.

“I was sitting in the living room as she prepared food in the kitchen. When he caught sight of her back, he recalled, “I couldn’t stop crying. She continued to cook for me despite being already quite weak. She took a long break after cooking since she was having trouble breathing.

Deng reported that the last dinner his mother ever made tasted just as nice as the others.

“The taste was the same as it had been. The entire dinner was consumed by me. I’ll always recall those tastes, said Deng.

Deng stated in his most recent video that “maybe my mother knew that I am a vlogger and this video is the last present she gave me.”

One of the viewers commented, “Love never dies; it just takes on a different form.”

“Don’t be so depressed. She only changed how she accompanied you. She sounds like the wind blowing through your ears. The star you can see in the sky is she. She’s never left you, and she’ll always be there, someone else commented.

One month after my mother passed away, I discovered a bag of frozen dumplings she’d baked for me in the refrigerator. It was stuffed with my favorite kind of meat. Another user related their own experience, saying, “I ate a bowl of these dumplings while crying into a bowl.”

Watch the video below:

Have you lost someone you loved? Take this moment to share your experience with others. And don’t forget to spread the news so that we can hear from more people.